Aster Hall will be closing its doors and they are having one final blowout event, chock full of art, music, poetry, great discounts and good people.

Check out Art Mag’s sneak preview video of the Leslie Wayne exhibit opening tonight 5-7 pm at Halsey Institute of Contemporary Art!  Read about the artists and the exhibit in the latest edition of Art Mag.

What to do this weekend in Charleston 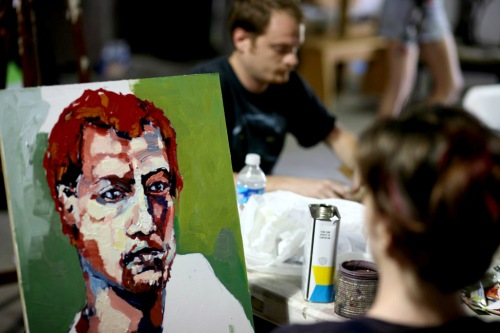 1. Make a Restaurant Week reservation!!!  We recommend McCrady’s, Husk, Circa 1886 and The Dining Room at the Woodlands Inn.

2. Go to The Real Estate Studio tonight for the opening of Collective|Eclectic from 6 – 9 pm.  Chris Dotson, Joyce Hall and Martin Ahrens will open their show tonight, curated by Josh James of Beyond the Gallery. 214 King Street.

3. Hit up the FR3SH Portrait Battle at Redux tomorrow.  24 painters will get started at 10 am and each round will eliminate competitors until only ONE remains, your Portrait Battle Champion.  Free admission, and bevies and snackies for sale to pay for the event, so buy, buy, buy and eat and drink!

I was pretty sad when I found out that I wouldn’t be spending Christmas with my family this year, so I decided to make sure to do something really fun and memorable so I could focus on that instead. I made a last minute decision to go to Mexico!!!

My brother, his wife, and my cousins from Australia all happened to be in the town of Cholula (yes, just like the hot sauce!) in the city of Puebla so I met them there and we spent Christmas together. My bro and Jesus actually share the same birthday so it was extra special to be able to be there on his birthday as well as Christmas!

Did you know that the largest pyramid on earth is in Cholula?! Hardly anyone knows this because the Christians came and put a church directly on top of the pyramid and then built all kinds of other things on top of it! Talk about trying to conquer a culture!

Right after Christmas, I went to stay with some artist friends from Charleston (Bea Aaronson and Stephen Eaker) who had moved to San Miguel de Allende three years ago along with another Charleston artist, EC Bell. San Miguel is a super cute, high altitude little art town in the middle of Mexico with tons of ex-patriots and artists. Apparently there are lots of Charleston – San Miguel connections as I randomly met some folks from Charleston while I was there too. And the Charleston Place Hotel actually has an affiliate hotel there called Casa de Sierra Nevada and my new friend Ari works there!  A friend from the states had been traveling all over the US and Mexico and ended up in San Miguel as well so we all had a great time together going to the local markets, watching people get married in the main town square, going horse-back riding in the middle of the night with a cowboy named Rodrigo, watching fireworks over an ancient cathedral on New Year’s Eve, eating amazing food, making new friends, listening to local musicians, and doing tons of art work together.

It was actually the first time I had drawn anything in years! I’m constantly surrounded by talented people so I feel a bit intimidated at times. It was great to be with my artist friends who encouraged me to express myself and generously gave me their awesome studio and supplies to play with! How lucky am I?! Bea and Stephen are doing really well there too. It’s great to see them succeed at what they love. They do a regular art lecture series that has become extremely popular, and of course, they sell their art work at their studio, Casa Verde. Check out their site to see the amazing place where I stayed! www.artcasaverde.com. EC is rocking it out too. I’ll be posting a video about that soon. 🙂

I was particularly inspired by all the symbolism I saw in San Miguel – hearts, angels, hands – as well as the genuine kindness of everyone around me. The people there seem to be very conscious of themselves, others, the environment, and most seem to be seeking spiritual and cultural enlightenment. That was extremely refreshing and exciting to be part of.

The most important part of this trip for me was to simply ••• PAY ATTENTION ••• to others, to myself, to the world around me. I learned many, many lessons in a short period of time and I’m super thankful for all of it.

With much love and gratitude.

What To Do This Week

Thursday: Poetry in the French Quarter

The bad ass Marcus Amaker, Brianna Stello and Jack Tracey will spin some words for you at the Hagan Fine Art Gallery & Studio from 5 – 7 pm.  28 1/2 State Street, downtown Charleston.

Artists Chris Dotson, Joyce Hall and Martin Aherns have been united for Collective/Eclectic, an art show curated by Josh James of Beyond the Gallery.  Collective/Eclectic opens at The Real Estate Studio, 214 King Street.  Art Mag <3’s what the Real Estate Studio is all about, because they love supporting the local arts community, and frequently exhibit local artists.  Keeps it fresh, keeps it interesting.

On that note, if you know of a business that supports local and/or emerging artists like The Real Estate Studio and Charleston Digital Corridor does–stay tuned for upcoming info on the next Flagship Gallery opening!–please let us know!  Email stacy@charlestonartmag.com

Today we unveiled our newest issue, and it’s super special for several reasons….

Distribution is happening now, so keep your eyes peeled for the latest one, or email stacy@charlestonartmag.com if you simply can’t wait!  In the meantime, check our website to see the online edition!!