Smut and Paste at SCOOP Studios this Friday

The girls at SCOOP Studios have never shied away from hanging a show that might create a little stir with the Old Guard of Charleston.  Doing it on Broad Street, in the heart of it all, makes it even better.  From Joel Parker’s keg-standing nudes to Ryan Cronin‘s message that Aliens are coming Dec 21, 2012 to Karen Ann Myer‘s sometimes disturbingly intimate scenes of the bedroom, SCOOP brings a fresh perspective and a perfect platform for the emerging artist to meet the forward thinking collector.

William Goodman‘s show Smut and Paste, opening this Friday, December 3rd, promises to be no different.  “My images are often veiled illusions which echo deep layers of my own life experience, both positive and negative. My paintings simultaneously evoke a conscious, as well as subconscious, reaction from the viewer,” states Goodman. The mixed media collages blends the modern day with retro imagery.

While I haven’t been able to see it all yet, the mixed media collages I have seen are very promising for a show that I will love and some will possibly hate.  But the point of good art is to get a reaction.  Instead of the gallery one walks in and out of in under 2 minutes, I like to see a show that will illicit a strong reaction.  I don’t really give a damn if it’s positive or negative, as long as you’ve actually looked.  Not the passive glance and move on to the line for wine.  But something that engages, gets a real reaction.  The whole point of art is to communicate to the viewer.

Dance with me by the Harvest Moon light TONIGHT at the Halsey! 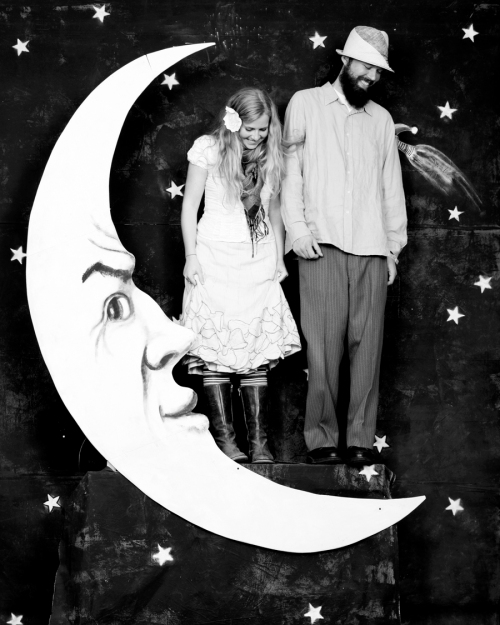 Everyone knows the Halsey Institute of Contemporary Art‘s annual membership parties are reason enough to join, let alone the amazing programming all year long.  Come join me tonight 7 – 10 for the Harvest Moon Bash.  The edibles & drinkables will be local, sustainable fare–which Art Mag is all about.  Get your very own Moon photo booth shot with your friends or your better half–make sure you wear festive attire so you’ll be in one of the pictures we feature next year!  Groove to the Blues by musician and Citizen Architect composer Jake Fussell & check out Running the Numbers, work by Chris Jordan, both part of the Bluesphere project.

The best part is, you can join right at the door so you don’t miss out on all this massive coolness–annual memberships start at just $15!

Halsey Institute of Contemporary Art, 161 Calhoun Street, in the Cato Center for the Arts at CofC. 7 – 10 pm. 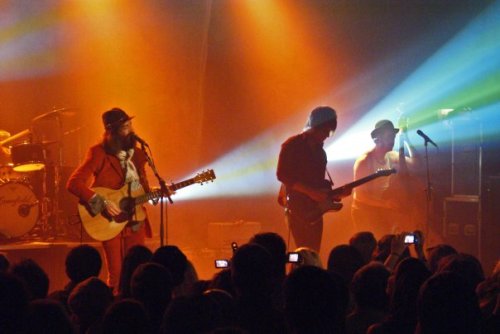 Crowfield, one of my favorite local bands, is playing at the Music Farm tonight, and I can’t think of a better way to post-Moon Bash.  It’s been a big year for Tyler, Joe, Parker, Micah and Ethan–major label Universal Records signed the boys, and they have had some big shows–like sharing the stage with Hootie and the Blow Fish and Edwin McCain, two of the biggest acts to come out of SC in the last two decades.

Charlie Mars will be opening; this is one show I WILL NOT miss the opener–you’ve heard his song Listen to the Darkside on Showtime’s popular Weeds, and more of his new cd all over the Bridge 105.5.  He’s really great.

And on Saturday, there will be a closing reception and ARTIST GARAGE SALE for UNEARTHED, a group show featuring Hirona Matsuda, Nina Garner, Kristy Bishop and Sarah Frierson’s work, which opened October 8.  The opening reception was so much fun, they are doing it again, and this time inviting more local artists like John Pundt–last seen at Pecha Kucha 8–Scott Debus, Lisa Abernathy and more to participate in their Art Garage Sale.  So bring your check book or cash (not accepting cards) and scoop up some fabulous finds!  Art Garage Sale starts at 3 pm, and the reception with refreshments and live music starts at 7 pm.

“Mac-ing” off & Auctioning for Good!

Work by Dorothy Netherland up for Redux's Auction

There’s so much great stuff going on this weekend…here’s the lineup of hot things we are hearing about this weekend:

Southern Cookin’ for the Modern Man at HUSK

Yesterday afternoon, the boy saunters into the Art Mag offices to find us hard at work.  He posed a most interesting query: Honey, how would you feel if I went to Husk tonight? (knowing I had other plans).  My answer was very colorfully worded, and not fit for print in this respectable publication.  I am very passionate about my food, especially when it’s the new restaurant everyone is talking about and I haven’t been yet.

So after Pecha Kucha 8 (awesomeness that deserves its own post), the boy wisked me off to the newest addition to Queen Street, HUSK, where we grilled our server and enjoyed every bite.

Drinks: I ordered a rose bubble, which was delightful but didn’t pair well with my food.

First: After much debate, we decided to try SC Shrimp and Clam Stew, Anson Mills Grits and Stewed Peppers, VA Guanciale.  This was so good we didn’t get any pictures before it was devoured.

Supper, Him: Carolina Beef Cheeks, Potato Confit, Oyster Mushrooms and Wood Fired Okra, Tomato Compote.  The boy who hates mushrooms ate everyone of them, and the rest of his meal for that matter.

Supper, Me: Country Fried Lamb Leg, Roasted Peppers and Rattlesnake Beans, Lamb Neck Gravy.  Holy Lamb, it was phenomenal.  The biggest omission in the meal description is the creamy potatoes residing beneath the meal, served in a Le  Crueset dutch oven.  The boy argued the Lamb Neck Gravy was the best thing on the table.

We skipped the sides for the table, but my vote would be for the skillet of Smoked Bacon Cornbread.  And I must give a super special salute to the Yeast Rolls with Benne Seeds and Smoked Salt–from the girl who never gets excited about bread.

We also skipped dessert in favor of a glass of wine at home, but they were exceedingly tempting, and I loved the unusual number of non-chocolate options, as I abhor everyone else’s favorite indulgence.

Hats off to our server Julie, who fielded our shotgun spray of questions about everything from the origins of the butter (Happy Cow Creamery) to the table decor to what the heck are Rattlesnake Beans? (hint: they only look like rattlesnake patterns until they are cooked, then they are quite delightful.)

SUMMARY: Husk gets a HELL YES and a Rebel Yell.  Embrace your Southern Roots and look for the modern twists.  This ain’t Granny’s cooking.  It’s better.

THE TIME IS NOW.  The Fashion Group International® is coming to Charleston & tonight is your preview.  Michael Mitchell Gallery will host all lovers of fashion at 438 King Street from 6:30 – 8 pm.  This is a perfect opportunity to mingle with industry professionals, learn about the FGI and enjoy vino and nibbles from Social Wine Bar, all while surrounded by contemporary art that is fresh and new.

The Fashion Group International® is a global non-profit organization with 5,000 professionals in the fashion industry, including apparel, accessories, beauty and home.  There is a $40 ticket, which will help support their endeavors locally and globally.  The board will be present, and you can learn all about why you will be dying to join in 2011 when they officially arrive!  Space is limited, so don’t delay, my darling style gurus.

Loving the Locals! Why We Joined Lowcountry Local First

The Art Mag girls have finally made the leap.  We are joining the grassroots powerhouse Lowcountry Local First! We have been watching them for quite some time, attending events and noticing the exciting movement that has been generated by their love and passion for all things local.  It’s high time we ALL join in.

Monday, November 15th is opening day of Buy Local Month and they are also planning a LLF Happy Hour on Thursday, November 18th at Med Bistro–which is super yummy, so make sure you get over there and meet the other cool locals making it happen in the Lowcountry.

The LLF’s mission is just the kind of thing Art Mag is all about, and we believe in what they are doing.  Charleston is such a special, magical place.  But just like any relationship, you have to give a lot of yourself to make it work, make it better.  It is SO important to preserve the unique fabric of the Lowcountry, which inspires us all.

Okay, I’ll get off my soapbox, and tell you all about MY DINNER AT HUSK last night!  Talk about embracing the Local!  Stay tuned, dear ones…

The Word is Out–Pecha Kucha 8 Location is… 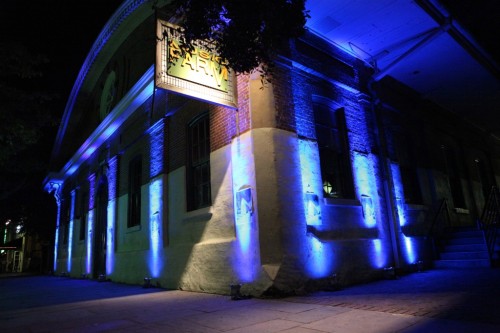 Pecha Kucha 8 will return to the Music Farm

We’ve been there before, and it’s a good space for it.  Buy your tickets now, as it always sells out.

Check out the PK blog for more info on each of the presenters:

The 39 Steps to a Successful Play 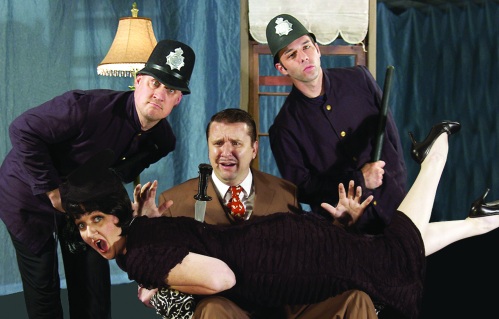 2. a who done it by Alfred Hitchcock

3. actors who can change characters at the drop of a hat

7. well that’s all well and good, but who would really read to 39?  The most important thing I can tell you is this play made my non-theatre loving boyfriend laugh out loud.  Yes, he literally LOL!  I enjoyed every moment of this hilarious and fast paced script.

It was a fabulous production by Charleston Stage’s talented and professional cast and crew.  I was incredibly impressed by the resumes of each of the actors, their ability to manage demanding day jobs and put on a play of this caliber.  Plus any excuse to visit the Dock Street Theatre, America’s first theatre, is a treat.

A Little Macabre is Good For You

The cast of Poe: The Conqueror Worm

On Saturday night, I ventured up to Park Circle for Theatre Verv‘s production of Poe: The Conqueror Worm.  It was a perfectly creepy evening for some Poe, and set the stage for an excellent Halloween weekend.

In residence at the South of Broadway Theatre, Verv is putting on “cutting-edge contemporary theatre.”  Poe was an interesting, fast paced mash up of writings by the most tortured of artists, Edgar Allen Poe.  The cast worked their magic quickly, forcing the audience to keep up.  This works for and against the production: there’s no chance of nodding off during a scene that is slowly marching on, but this might not be a good introduction for a novice.

While many of Poe’s short stories were visited, The Tell-Tale Heart was the most outstanding.  The lunatic widow, played by Dallas Corbett, brought me in, and kept me hanging on each sentence.  The story of phantom heartbeats, guilty conscience and madness was well communicated.

The Madam and the Widow

The Madam, Sarah Coe, was a particularly engaging character, neither under- nor over-acted.  Her control over the other characters was apparent and perfect.  The Songbird, played by Carole Moore, has a lovely voice that served the part well.  Compliments on her arrangement of the melody for The Sleeper.  David Barr as The Barker made you feel like Poe himself had joined us for the evening, all the way from his cold grave in Baltimore.

Set design was minimal and communicative, and the cast made the most of the black-box theatre.  Action happened all around you, which served to heighten the creepiness of Poe’s tales. The threat of danger moved all around you, slinking and shrieking, closing in on you.

There are three more performances of Poe: the Conqueror Worm this weekend, and I suggest you make a Park Circle night with dinner at EVO or Sesame (get the Memphis burger–peanut butter, bananas and bacon!  The King would be proud) before heading to see Poe.